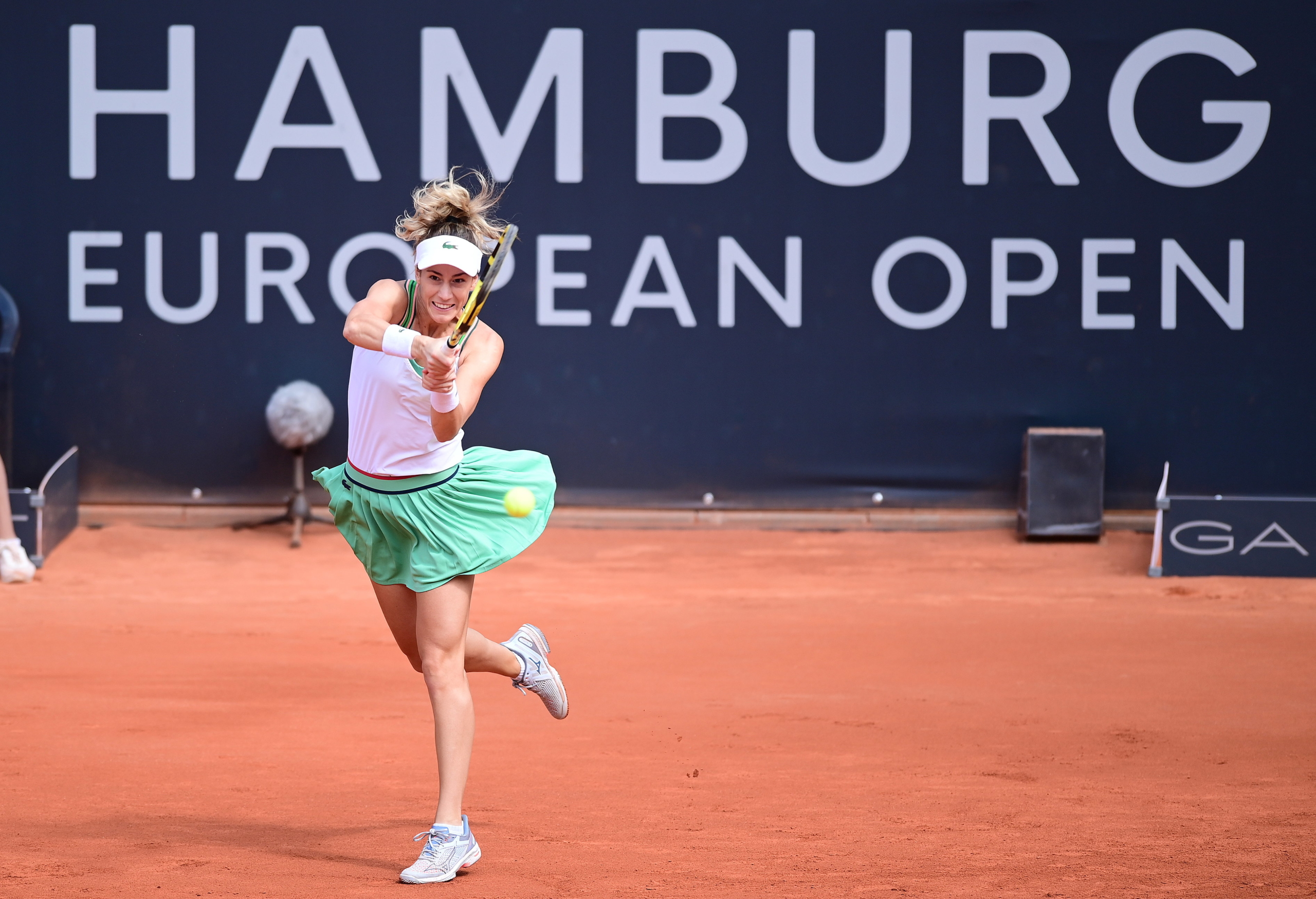 Bernarda Pera remains the player to beat on the WTA Tour. The 27-year-old Croatian-born American extended her winning streak to 11 matches after she edged out seventh-seeded Maryna Zanevska of Belgium 6-2, 6-4 at the Hamburg European Open Friday afternoon. The victory earned Pera a spot in her second consecutive championship match.

Pera, who managed to win her maiden WTA crown in Budapest last week thanks to her red-hot form, dominated her semi-final encounter with Zanevska by using her powerful groundstrokes and taking balls as early as possible. The World No. 81 broke her opponent’s serve four times and won 57 per cent of the total points played to advance in one hour and 20 minutes.

“It feels amazing. It’s just overwhelming. I am playing good tennis and I am happy that I got rewarded for it,” said Pera, who hasn’t dropped a set during her impressive run of the past two weeks.

“I have been working hard for a long time and I felt good on practice, but I wasn’t able to execute that in matches. Then something changed. I relaxed a little bit. By winning one match by another, the confidence grows.

Asked if she could press a magic button to win a Grand Slam title, which one would it be? “US Open,” Pera responded with a big smile. “Home soil. They put on a really good show. It’s really loud, a lot of people. That’d be fun to win.”

Later, top seed Anett Kontaveit reached her first WTA Tour final since February. The World No. 2 from Estonia fought past Anastasia Potapova 6-3, 7-5. Kontaveit capitalized on seven of her 10 break-point chances to win in one hour and 43 minutes.

“It was a good match, I was happy with the way I was hanging in there and fighting for every point,” said Kontaveit, who is making her debut at the Rothenbaum Tennis Complex this week. “I had a very warm welcome from the tournament. I still need to see more of the city, but I am having a nice time here. I really like the Center Court and I feel very good.”

A six-time champion on the WTA Tour, Kontaveit will bid for her first title on clay tomorrow. “Every time I play a tournament, I want to win it. I am really happy to get to the final with little to no preparation. It is exciting, new opportunities. I am really looking forward to it,” she said.

Kontaveit, who describes herself as a player who adapts to different conditions pretty quickly, won the only previous meeting between her and Pera in the first round at this year’s Wimbledon. “I am definitely trying to give her a hard time time tomorrow,” the Tallin native said. “She has an incredible record, winning in Hungary last week. I am impressed by the way she is playing but I am a tough opponent as well and hopefully it is going to be a good match. Whoever is better, will win the title.”

Pera will attempt to win her second career trophy when she faces Kontaveit. “I played Anett in Wimbledon this year,” she said. “I lost, but it was close in the first set. Great player, very aggressive. Let’s see, but the target is to win the title. For sure it’ll be fun tomorrow.”

In the men’s quarterfinals, top seed Carlos Alcaraz was in cruise control during his 6-0, 6-2 second-round victory over Karen Khachanov. The 19-year-old Spaniard, a four-time ATP Tour champion this season, fired 21 winners against seven errors to reach the stage of the final four in just over an hour.

“I played unbelievable today, probably one of my best matches this year,” said Alcaraz, who has improved with every match this week. “I’m pretty happy with the performance that I’m playing in this tournament. Yesterday was amazing as well. I’m training every day to be solid and at the same time to be aggressive. That is my game.”

Asked if he has developed a daily routine in Hamburg, Alcaraz explained: “If things go well at the beginning of the week, I am trying to repeat them later: taking the same shower, practicing or eating at the same hour and doing the same things during the warm-up.”

Next, the World No. 6 will play Alex Molcan of Slovakia, who benefited from the retirement of Borna Coric, leading 7-6(7), 2-0. The 25-year-old Croatian was forced to stop playing due to a left leg injury.

Earlier, NextGen ATP-Italian Lorenzo Musetti defeated Alejandro Davidovich Fokina of Spain 6-4, 6-3. The 20-year-old from Carrara was more solid on his second serve, winning 77 per cent of the points to succeed after one hour and 30 minutes. Musetti, who was on a six-match tour-level losing streak before beating Dusan Lajovic and Emil Ruusuvuori in the first two rounds, has reached his first semi-final of the season.

“I am really happy, I played very well,” the World No. 62 said afterward. “I had to save two match points in the first match and now I am in the semi-final. I had some tough moments this year, also dealing with injuries. There are always ups and downs throughout a season and this is an up. I hope it will continue like this.”

Musetti will oppose in-form Francisco Cerundolo of Argentina. The champion of last week’s clay-court event in Bastad battled past Aslan Karatsev on a packed Court M1, 6-3, 4-6, 7-6(4) in two hours and 25 minutes.

Alcaraz Advances To Quarterfinals In Hamburg