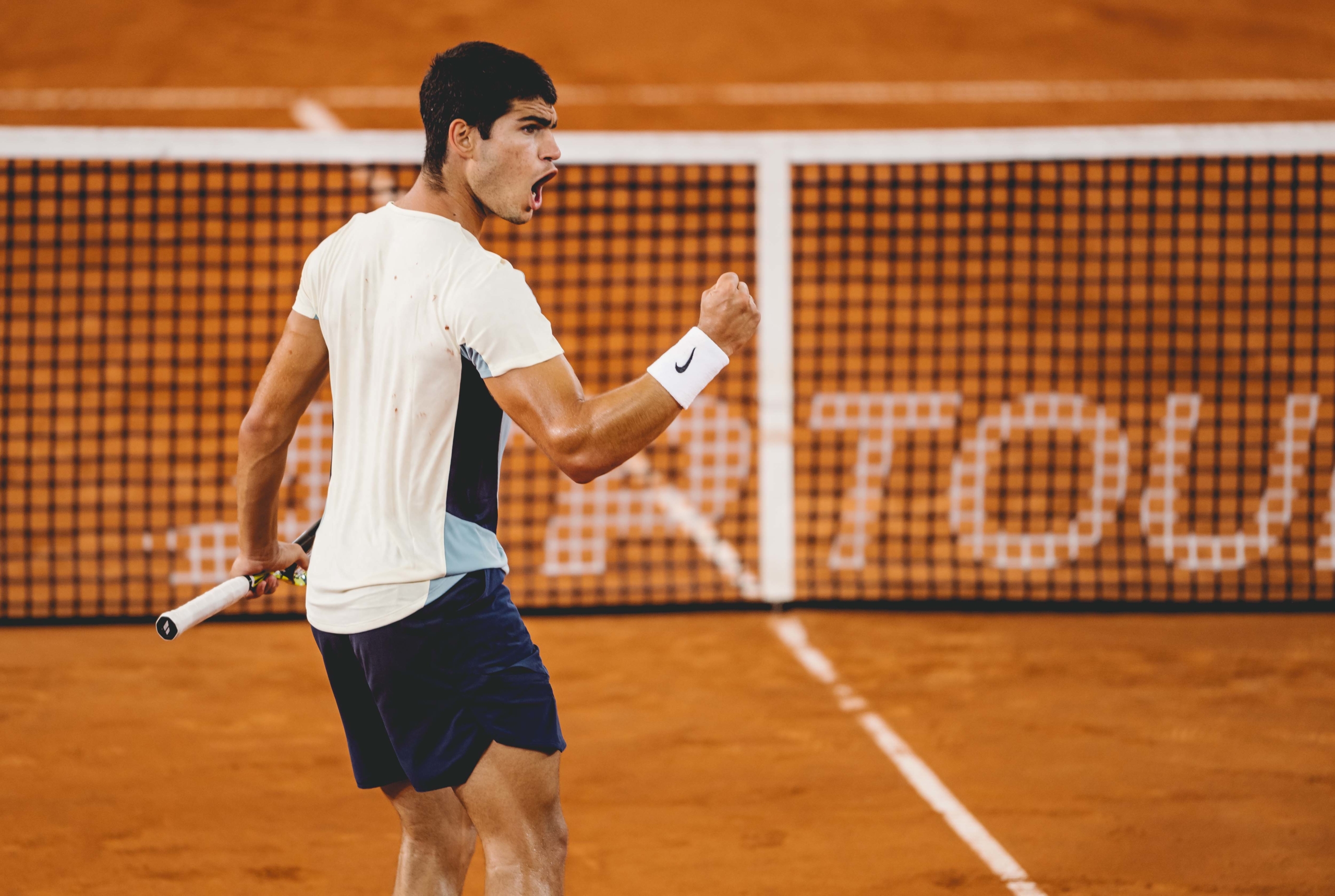 Alcaraz Advances To Quarterfinals In Hamburg

The top two seeds of the Hamburg European Open ATP 500 event were in second-round action Thursday. However, each came away with different outcomes. In the match of the day, Spanish teen sensation and World No. 6 Carlos Alcaraz edged past last year’s finalist Filip Krajinovic 7-6(4), 6-3.

Under a closed roof on Center Court, the No. 1 seed was pushed to the limit for almost two hours but held his nerve to deny the Serbian a memorable victory. Instead, Alcaraz hit 22 winners and set himself free in the second set with his powerful forehand.

“It was pretty tough,” said Alcaraz. “Filip played unbelievable from the beginning until the end and I needed to play one of my best matches on the tour. He had chances to win the first set (serving for the set at 5-4) but gave me the chance to stay in the set. It was pretty close today.”

The 19-year-old from Murcia will next take on No. 7 seed Karen Khachanov, who beat Italian veteran Fabio Fognini 6-3, 7-5 in one hour and 42 minutes.

Andrey Rublev, the 2020 champion at the Rothenbaum Tennis Complex, fell to in-form Francisco Cerundolo of Argentina 6-4, 6-2. The winner of last week’s event in Bastad continued his great run of form by recording his second consecutive Top 10 win. Cerundolo capitalized on five of his 12 break-point chances to prevail after one hour and 32 minutes.

“I think I played another great match. I felt really comfortable on the court,” the 23-year-old Cerundolo told Barbara Schett during his on-court interview. “I think in the first three games I didn’t play that bad, but he was really solid and didn’t miss many balls. Then I started feeling more confident and I think I was very solid today.”

The Argentine from Buenos Aires, who defeated World No. 5 Casper Ruud en route to his first triumph on the ATP Tour in Sweden, will take on Aslan Karatsev in Friday’s quarterfinals after the 28-year-old eliminated Colombian qualifier Daniel Elahi Galan 3-6, 6-3, 6-4.

“It is really good to have this confidence at this level,” Cerundolo added. “It is the first time it has happened for me. I am playing against the top guys, and I am playing well and it is unbelievable. I really happy with my game and my head, because I am keeping my concentration and playing the whole match well.”

Cerundolo was asked how important was it for him to catch up with his younger brother Juan Manuel, who claimed his maiden ATP title in Cordoba earlier in the season.

“We are really close. It is a competition between us but a good one,” Cerundolo responded. “We push each other a lot and are both trying to improve. Winning my first title last week gave me some extra confidence.”

Meanwhile, the semi-finals of the WTA 250 event are set. Top seed Annet Kontaveit benefited from the retirement of Hamburg European Open tournament ambassador Andrea Petkovic, leading 6-0, 2-0. The World No. 2 from Estonia was in cruise mode before Petkovic was forced to stop playing due to an adductor muscle strain.

“It was tough to see her not being able to finish the match,” Kontaveit said. “From my point of view, I was happy with the way I was hitting the ball. I felt the ball pretty well all the time the match went on. I am happy with the things improving throughout the tournament.”

Petkovic said: “Anett really played well right from the beginning. She seems to like my game.” However, the German admitted she could also take some positives from this week. “I played two good matches. Now, it’s all about recovering and getting fit again,” she said.

Earlier in the day, Anastasia Potapova powered past last year’s Roland-Garros champion and No. 3 seed Barbora Krejcikova from the Czech Republic 6-1, 6-3 in 71 minutes.

“I was coming to Hamburg with lot of confidence after reaching the semis last week in Lausanne,” said Potapova, who clinched her maiden WTA Tour crown in Istanbul in April. “The first title is always the sweetest one. It shows me that no matter what, keep doing your work and the results will come. It doesn’t matter where you play, even on the moon, if you feel good you can play everywhere. Of course, I feel more comfortable here in Hamburg, as the courts are faster. I feel great here. Let’s see what is going to happen.”

Potapova, who currently is enjoying a career-high ranking of World No. 63, is coached by former Top 20 ATP star Igor Andreev. It is a partnership that is paying off.

“We have a great relationship on and off the court. He is a good friend of mine and as a former professional he understands how a player feels on the court. He was on the tour for a long time, beating top players. The key is that he knows what to say in the important moments,” Potapova explained.

Maryna Zanevska reached her first semi-final of the season following a determined performance against No. 4 seed Aliaksandra Sasnovich. The seventh favourite from Belgium won 6-4, 7-5 in one hour and 35 minutes.

“This week is going well for me. It was a quality match,” Zanevska said afterward. “When I arrived at Hamburg, and we went out for dinner for the first time I said that I wanted to come back as a tourist. It is such nice city, and the organization of the tournament is great.”

Next, Zanevska will play Bernarda Pera. The red-hot US-American cruised past Katerina Siniakova of the Czech Republic 6-3, 6-1 in 71 minutes. “I feel good on court, playing some really good tennis. This is my 10th win in a row, and I am very happy,” said Pera, who lifted her first WTA Tour trophy in Budapest on Sunday.

What has changed for her on the court? “I wish I knew. So, I can repeat that for the rest of my career,” Pera said. “I am trying day in and day out. You never know in tennis, but I am glad I got my five minutes.”