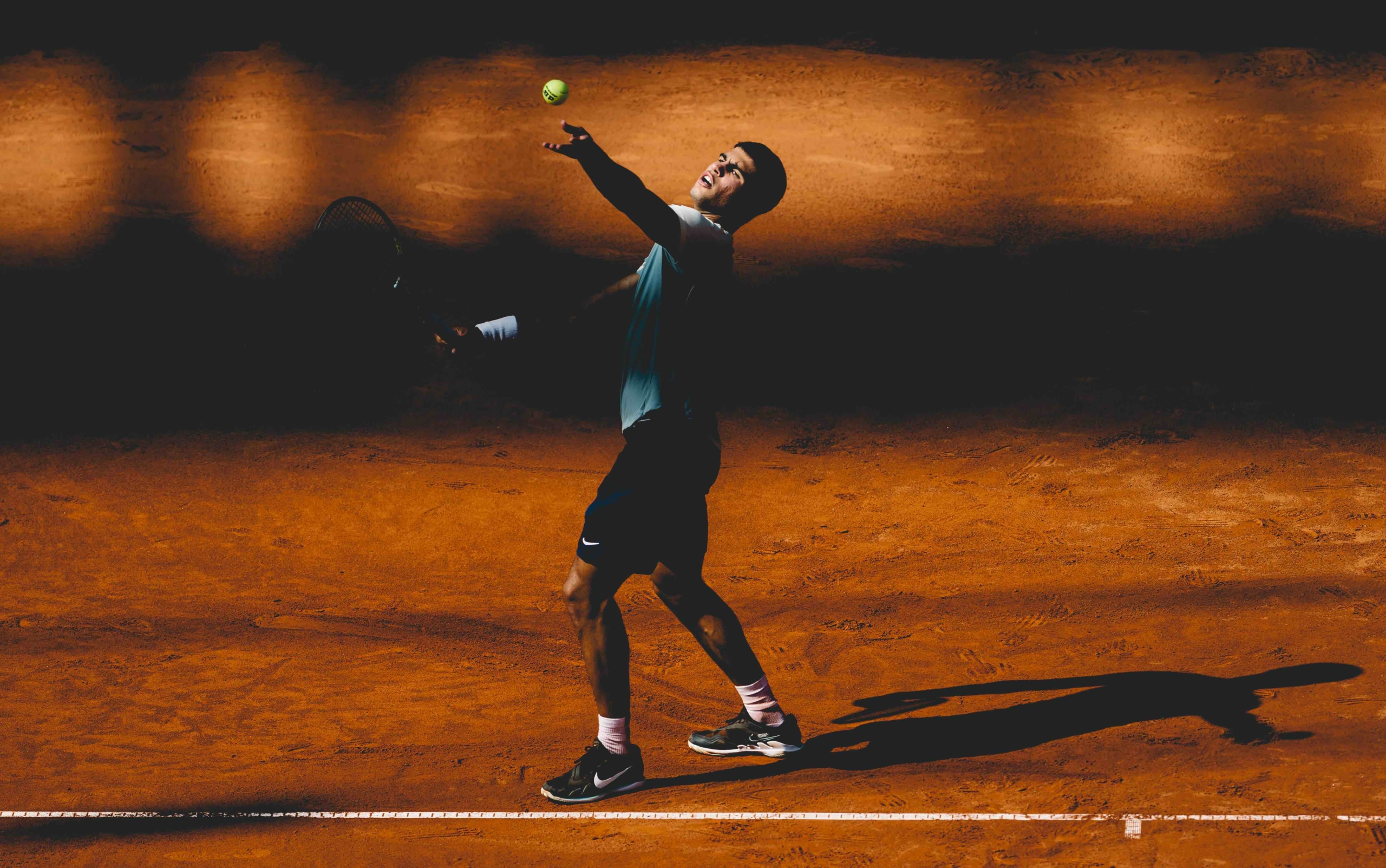 Carlos Alcaraz is back in action at an ATP 500 clay-court event, making his debut at the Hamburg European Open. So far in 2022, that scenario has only ended one way. The 19-year-old Spaniard became the youngest ATP 500 champion in history in Rio de Janeiro in February followed by a triumph on home soil in Barcelona in April.

This week at the Rothenbaum Tennis Complex, Alcaraz is attempting to complete a clean sweep of this season’s ATP 500 clay-court tournaments. However, the top seed had to dig deep to outlast German wild card entry Nicola Kuhn 3-6, 6-1, 7-6(3) in a first-round match contested on a sunny and hot Tuesday afternoon.

Alcaraz rallied impressively after he dropped the opening set to the 259th-ranked Kuhn, whose aggressive game paid off in the early stages of the match. With the start of the second set, though, the World No. 6 Alcaraz became more consistent and showed his precocious talent many times to level the match before holding his nerve in the deciding-set tie-break. Alcaraz secured victory after two hours and 26 minutes.

“It’s beautiful here. It was great to play on the Center Court in Hamburg for the first time. I expected a tough match, but I didn’t play very well and need to improve for the next round,” said Alcaraz, who was competing in his first match following his run to the fourth round at Wimbledon. “I came from the grass, and the difference was too much. I’m really happy to reach the second round.”

The teenager from Murcia will next face Filip Krajinovic. The 30-year-old Serbian battled past Sebastian Baez of Argentina 6-1, 4-6, 7-6(6) in two hours and 24 minutes.

In other men’s action, Italy’s Fabio Fognini recorded his 400th ATP Tour match win following a 6-3, 3-6, 7-6(5) triumph over Aljaz Bedene from Slovenia. In his 10th appearance in Hamburg, the 2015 Rothenbaum champion outpointed his rival 104-101 after two hours and 26 minutes. Up next for Fognini will be No. 7 seed Karen Khachanov.

In the WTA 250 tournament, top seed Anett Kontaveit of Estonia opened her title bid with a 6-3, 7-6(3) first-round win over Irina Bara of Romania. The World No. 2, who accepted a late wild card into the main draw, broke her opponent’s serve six times to advance in one hour and 36 minutes.

“I really like the Center Court here. I think it has a good atmosphere,” Kontaveit said. “It was a fight with the heat for me today. I was training in Estonia, and it has been freezing there the whole summer. Conditions were tough for me, but I took it as a challenge, and this will definitely improve my fitness. My opponent made me hit so many balls and I am happy to be through.” Next, Kontaveit will play Rebecca Peterson from Sweden.

In the bottom half of the draw, US-American Bernarda Pera took out defending champion and No. 9 seed Elena-Gabriela Ruse of Romania. Pera, ranked 81st, capitalized on seven of her 10 break-point chances to succeed after one hour and 27 minutes.

“She is a great player. I started very well, got a little tired at the end but I am happy with the win,” said Pera, who clinched her maiden trophy on the WTA Tour in Budapest three days ago. “I felt fine, but I woke up today thinking ‘I have to do this all over again from the first round’ and felt a bit tired. When I got on the court, I was okay.”

On Sunday in Hungary’s capital city, the left-handed Pera became the fourth first-time titlist on the WTA Tour this season.

“It was dream week going from the qualifying to the title, winning seven matches. I played really well and will try to continue like that here. The facility and the stadium here is very nice. I just hope that I will have the chance to see a bit more from the city,” said Pera, who was born and raised in Croatia but moved to the United States when she was 16 years old.

Asked about her game style, the 27-year-old Zadar native responded: “I hit the ball pretty hard, which is my main advantage. I like to be aggressive and to control the point but sometimes I am a bit impatient.”

Pera will try to extend her winning streak in the second round against Swiss qualifier Joanne Zuger, who edged out recent Wimbledon quarterfinalist Jule Niemeier of Germany 6-4, 0-6, 6-4 in one hour and 56 minutes.

“I don’t know her,” Pera said of her upcoming opponent. “It will be our first meeting, so I just have to look at some of her matches tonight or tomorrow.”

Tournament ambassador Andrea Petkovic has already booked her spot in the quarterfinals. The eighth-seeded German beat Misaki Doi of Japan 6-4, 6-3 in one hour and 43 minutes. Joining Petkovic in the stage of the final eight is last year’s Roland-Garros champion Barbora Krejcikova. The third seed from the Czech Republic eased past Magdalena Frech of Poland 6-3, 6-0 in 79 minutes.