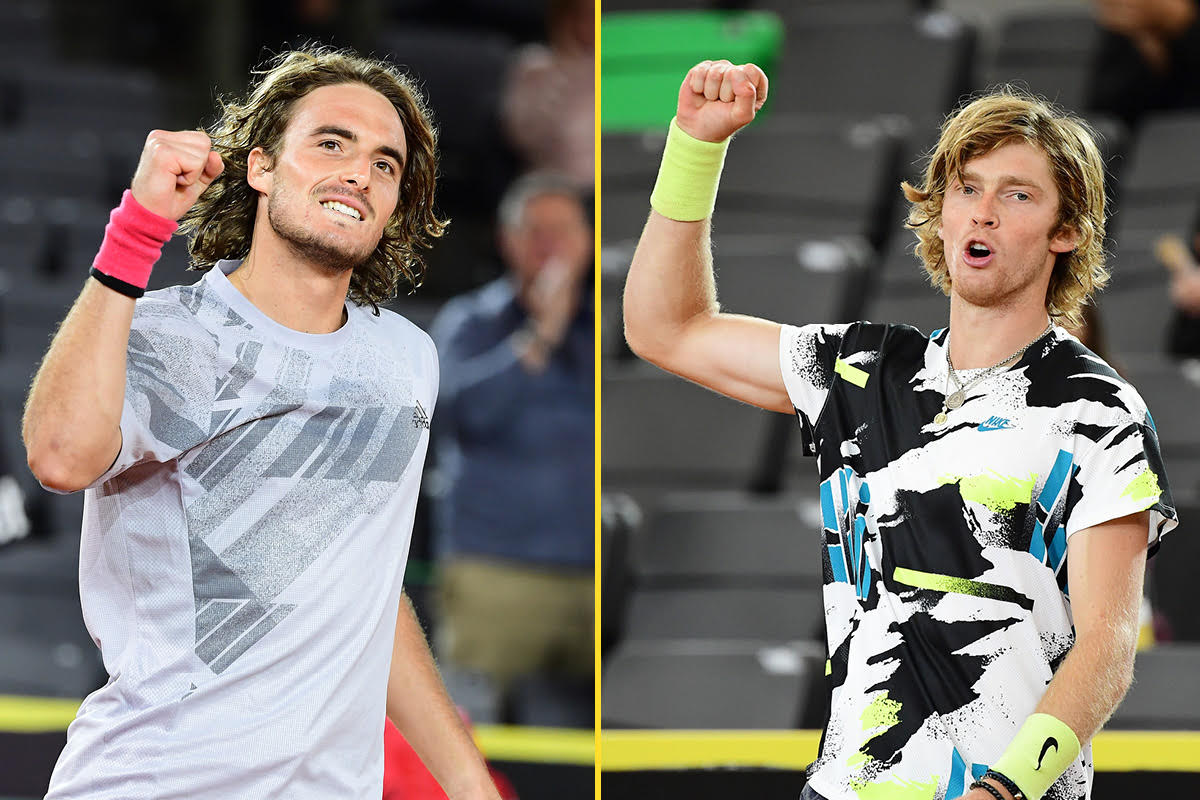 Stefanos Tsitsipas and Andrey Rublev will compete in Sunday’s singles final of the 2020 Hamburg European Open. In his toughest challenge this week so far, the No. 2 seed from Greece battled past Cristian Garin of Chile, winning 7-5, 3-6, 6-4 in front of 2,250 spectators under a closed roof on Centre Court.

Tsitsipas fired 12 aces and won 68 per cent of his first-service points to advance to his third title match of the season following his triumph in Marseille and finishing runner-up in Dubai.

“The match was very close but the break in the third set gave me confidence,” Tsitsipas said about the key to success in today’s match, which lasted two hours and 15 minutes. “If you take the right decisions, not panicking, it will pay off in the end.

“Conditions were different today compared to the last three matches. The court became pretty fast and heavy. It’s difficult to slide on it, as sometimes there is not much clay on top, but I don’t mind it.”

The 22-year-old Greek also mentioned that he is happy having his father Apostolos back in his corner this week in Hamburg. “Last week in Rome, I played my first match without him next to me on court since I was 12,” Tsitsipas explained his special relationship with his dad and added that he appreciates his presence on court even more now.

Earlier on Saturday, Andrey Rublev overcame #NextGenATP Norwegian Casper Ruud by the score of 6-4, 6-2 in one hour and 25 minutes to return to his second consecutive final at the Rothenbaum tournament.

The No. 5 seed from Russia capitalized on five of his eight break point chances to seal victory in one hour and 25 minutes.

“It’s my first ever time that two years in a row I reached a final at the same tournament,” said Rublev, who lost to Nikoloz Basilashvili in 2019.

“Last year was a present, as I was down with a break in many matches. This year, I deserved it by showing good tennis. For the moment, it is the most special tournament for me. We will see how it goes tomorrow.”

Rublev will face Tsitispas for the trophy on Sunday at 12 noon local time. They are tied at 1-1 in their head-to-head records. Tsitsipas claimed a five-set victory against the Russian en-route to the 2018 Next Gen ATP Finals trophy and Rublev won their most recent match in four sets at last year’s US Open.

The singles final will be followed by the championship match in doubles, when John Peers of Australia and Michael Venus from New Zealand will oppose the Croatian duo of Ivan Dodig and Mate Pavic.