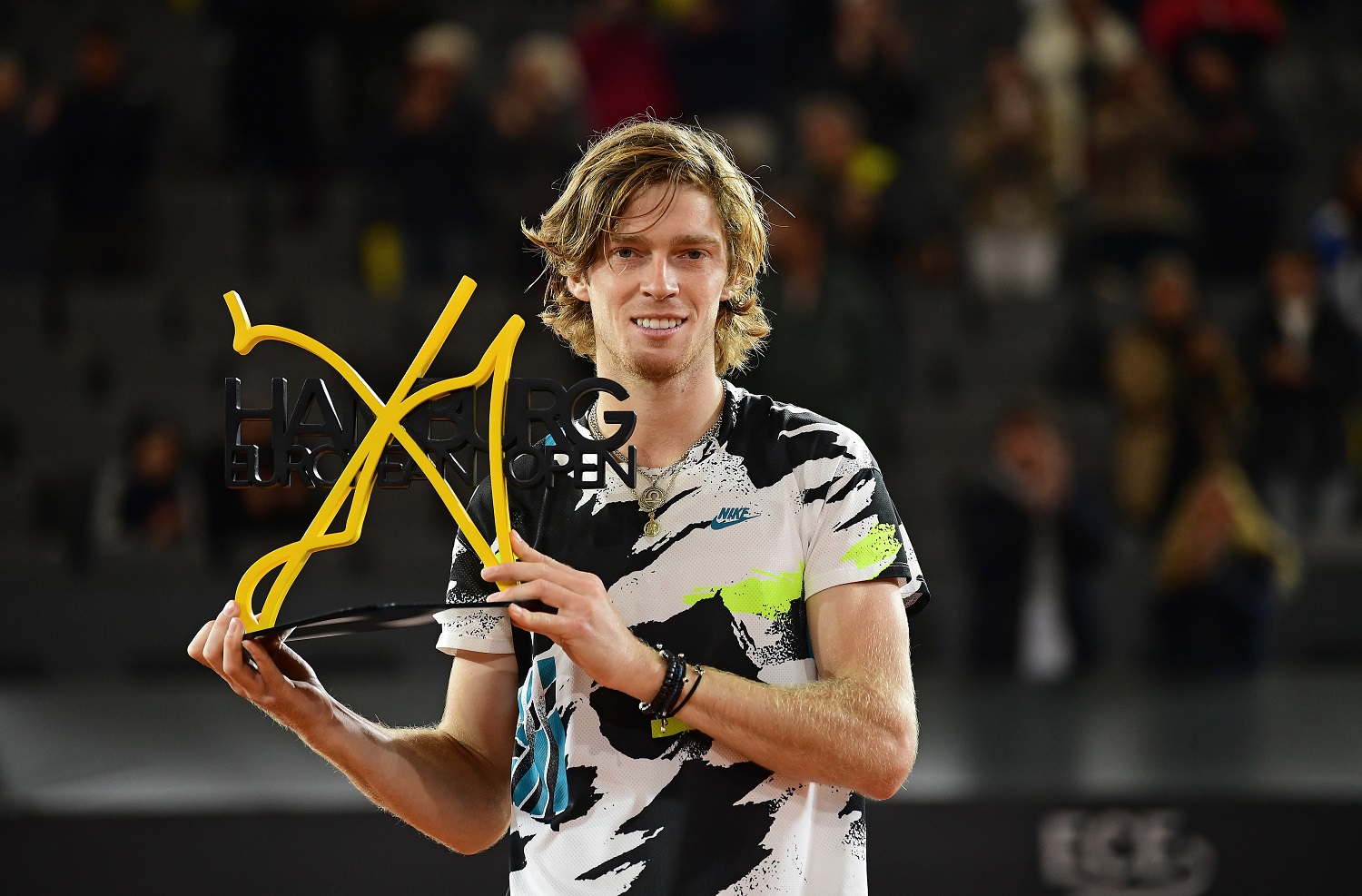 Andrey Rublev is the champion of the 2020 Hamburg European Open. The 22-year-old from Russia outlasted No. 2 seed Stefanos Tsitsipas of Greece, winning 6-4, 3-6, 7-5 on a chilly Sunday afternoon at the Rothenbaum Tennis Center.

In front of 2,000 spectators and under a closed roof on Centre Court, Rublev rallied from 3-5 down in the deciding set to earn his fifth career trophy, his first at ATP 500 level, after two hours and 19 minutes of play. The World No. 14 was appearing in his second straight Hamburg final, after falling in three sets to defending champion Nikoloz Basilashvili in last year’s title match.

“It is an amazing feeling,” said Rublev. “I realised it only when they called double fault… a few seconds later I started to realise that it is over, and I won.”

The Moscow native lost his serve twice in the final set but managed to come back. “After I got broken the first time, I was a bit disappointed because I had some chances to win the game and I didn’t make it. When I broke back and lost my serve again, I thought it was over. In the end, I was lucky.”

Rublev took away from Northern Germany €79,330 in prize money as well as 500 ATP Ranking points.

Rublev has won 25 of his 31 tour-level contests this year but there was not much time to celebrate. “As soon as I finish press, I will go to the airport flying to Paris,” explained the Russian, who experienced a similar situation at his previous two title wins earlier this season.

“When I won Doha, we needed to fly to Adelaide the next day. When I won Adelaide, the same day in the afternoon I had to fly to Melbourne to compete in the Australian Open. It’s the same story now but it’s okay. That’s part of our sport.”

Tsitsipas was also seeking his first ATP 500 title in his fifth final at the level. The reigning Nitto ATP Finals champion has reached three championship matches this year, highlighted by his second straight triumph in Marseille in February.

“It is a pity. But that is what our sport is about,” said Tsitsipas during his on-court speech. “It is all about fighting and at the end, the one who deserves it the most is the one that puts in the hardest work and dedication.

“I would like to take a moment and thank the city of Hamburg, the sponsors and all the people who came out to support us this week. I received a very warm welcome. I really appreciate it a lot. I feel sad to walk away from here without winning the title, but I can’t wait to be back next year to hopefully do even better.”

Later in the day, John Peers of Australia and Michael Venus from New Zealand took the doubles title. The duo defeated the all-Croatian combination of Ivan Dodig and Mate Pavic 6-3, 6-4 in 67 minutes.

“It’s been a great week, perfect preparation for next week in Paris,” said Venus.

“I enjoy coming back to Hamburg. We played a couple of high-quality matches in a tough draw. We are really excited and hope to keep building on it,” added Peers, who has clinched his third Rothenbaum tournament title following his triumphs in 2015 and 2016.

The Hamburg European Open will return in 2021, scheduled to be held from July 10 to 18.