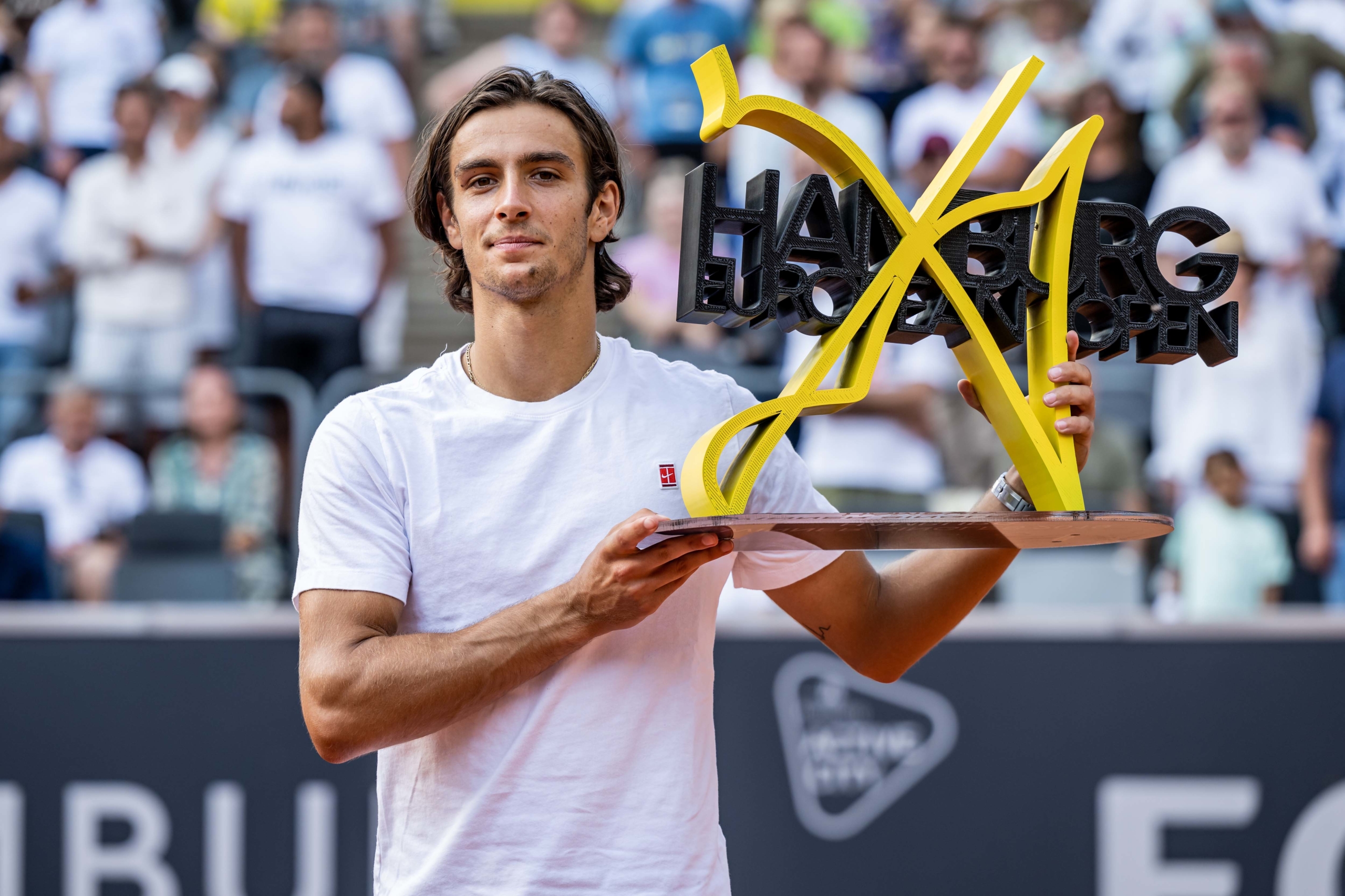 Lorenzo Musetti captured his maiden title on the ATP Tour by winning the 2022 Hamburg European Open. The 20-year-old Italian battled past fellow Next-Gen star and the tournament’s top seed Carlos Alcaraz of Spain 6-4, 6-7(6), 6-4 on Sunday.

Thirty degrees in the air and two of the ATP Tour’s hottest players on Center Court made up the perfect ingredients for a stunning final held in the excellent atmosphere of a packed Rothenbaum Tennis Stadium. Musetti was more mature and smarter in the opening set, as he dominated most of the rallies from the baseline and used the drop shot a lot to secure the set with a cross-court forehand winner after 43 minutes.

Musetti also set the tone early in the second set by gaining a break in the first game, but the World No. 62 couldn’t serve it out it the 10th game after missing two match points. Alcaraz saved three more match points in the tie-break and pushed the encounter the distance. The atmosphere heated up in the decider, but Musetti kept his cool. He showed his mental fortitude and finally converted his sixth match point when the 19-year-old Spaniard missed a backhand after two hours and 46 minutes.

“You inspire me a lot,” Musetti told Alcaraz during the trophy ceremony. “I work harder. The ATP uploaded our videos from two years ago, when we were still kids playing Challengers. We are still young but we both played better.”

The Carrara native added later in his press conference: “It was a rollercoaster, one of my best matches and it was maybe even more emotional than winning 6-4, 6-4. I think we both played three hours of fantastic tennis. We showed our best. I had so many opportunities, but he came back. When I lost the second set, I thought it was over but then I found my last energy and, in the end, hard work pays off. I am really happy to be the champion.”

“Physically I feel good but there is still some adrenaline left in my body and for sure I will not sleep tonight. But that’s not a problem,” Musetti said with a smile. He will try to continue his run in Umag next week.

“He deserved the win today,” said Alcaraz, who attempted to complete a clean sweep of this season’s clay-court ATP 500 events after lifting trophies in Rio de Janeiro and Barcelona in addition to his ATP Masters 1000 triumphs in Miami and Madrid. “He played better than me, more aggressive all the time. I fought until the last ball, and I am happy.”

The teenager from Murcia pocketed €178,170 in prize money as well as 300 ATP Ranking points, which will help him to crack the Top 5 for the first time on Monday.

“It means a lot, as I work hard every day. Top 5 is pretty amazing and I will keep going to reach my dream, becoming World No. 1,” said Alcaraz after his Hamburg debut.

“It is an amazing city with amazing people, I enjoyed every single second here,” he added and told the Hamburg crowd: “See you soon!”

Earlier in the day, Lloyd Glasspool and Harri Heliovaara claimed the Hamburg European Open doubles crown without dropping a set. The British-Finnish combination defeated No. 4 seeds Rohan Bopanna of India and Dutchman Matwe Middelkoop 6-2, 6-4 in 63 minutes.

By lifting their second team title on the ATP Tour following their triumph in Marseille last year, Glasspool and Heliovaara split €108,770 in prize money and collected 500 ATP Doubles Ranking points.

“We were playing really well all week. Harri’s serve made a big difference in this match today. This helped us,” said Glasspool.

“We really clicked this week. We had some good results this year. At the beginning of the year we didn’t feel that comfortable on clay but it has become our best surface. We serve well and give big pressure to our opponents with our aggressive return game. We feel very good on court, great chemistry and we enjoy playing together,” Heliovaara added.

“We lost three finals this year and definitely didn’t want to lose a fourth. It’s about learning how to handle the nerves but we found our rhythm and gained confidence for the upcoming weeks,” said Glasspool.

Heliovaara, who became the second champion from Finland in the long history of the prestigious tournament after Henri Kontinen (in 2016 with John Peers), added: “They say Hamburg is one of the most beautiful cities in the world and I have to agree.”

Hamburg European Open to return in 2023