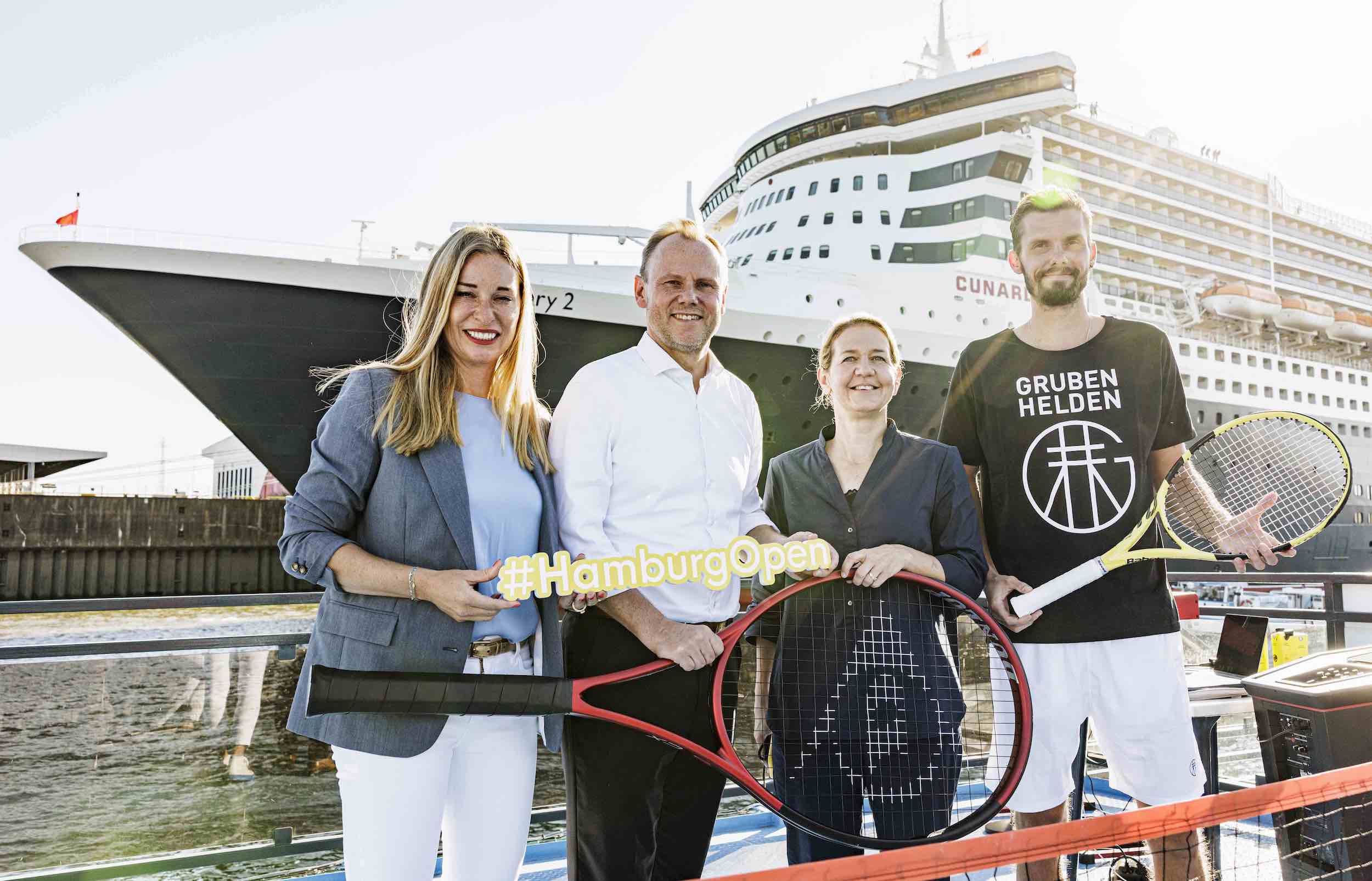 Now for a piece of news to make the hearts of tennis fans in northern Germany beat faster – the Spanish shooting star Carlos Alcaraz will make his debut in Hamburg. The 19-year-old world No. 7 who, after his big wins this year, is being talked about by the whole world, will head the men’s entry list at the Hamburg European Open (16 to 24 July). He is followed by the world No. 8 Andrey Rublev, the winner of the 2020 tournament at the Rothenbaum venue, and the rapidly improving youngster Jannik Sinner (Italy/ATP 13). The 20-year-old South Tyrolean is premiering, like Alcaraz, in the Hanseatic city.

In the equally strong women’s event, the world ranked No. 8 and Australian Open runner-up Danielle Collins (USA) leads the entry list. Top 20 players set to compete in the north German city are the French Open semifinalist Daria Kasatkina (WTA 13) and Barbora Krejcikova (Czech Republic/WTA 15), the 2021 French Open champion. The player fields were announced at a major press conference in the Port of Hamburg on Wednesday evening. The long-standing clay court tournament at the Rothenbaum stadium will be taking place for the first time since 1978 as a combined men’s and women’s event.

“2022 marks the first serve for another great chapter at the Rothenbaum in Hamburg: For the first time since almost 45 years, we can again look forward to a combined men’s and women’s tournament in the Active City. It a one-off in Germany. It means we are continuing the big tradition of the oldest German tournament and are giving women’s and men’s tennis the equal stage that the sport deserves. Tennis fans can already look forward to a highly attractive field and top international tennis,” said Sport Senator Andy Grote at the press conference jointly organised by the Hamburg European Open and Cunard, the tournament’s exclusive cruise line partner on board MS Hammonia. Right after the press conference, the Queen Mary 2, the favourite ship amongst the people of Hamburg, was accompanied when sailing out of the port.
“We’ve got a sensational player field for our first combined tournament which will be a great experience for tennis fans. It is something we can be very proud about. We will watch some big names and some Hamburg crowd favourites, and we will present the future of tennis,” said Tournament Director Sandra Reichel.

“Carlitos” Alcaraz, who this year has already triumphed at the 500 ATP tournaments in Rio de Janeiro and Barcelona as well as at the Masters events in Miami and Madrid, nobody has won more tournaments this year, is generally considered to be one of the hottest properties in the tennis world. He will be displaying his outstanding qualities for the very first time on German soil. “I am looking forward to playing in Hamburg, as the tournament has a big tradition. I will try to leave my mark in the history of the Hamburg European Open where Spanish players have always had a lot of success. Lifting the trophy in this nice city would be a dream come true.”

The Spaniard will however be up against strong competition. It includes not only Rublev, the 2020 winner and 2019 runner-up, but also the clay court specialist Diego Schwartzman (Argentina/ ATP 15), the title holder and Olympic bronze medal winner Pablo Carreno Busta (Spain/ATP 19) plus the Frenchman Gael Monfils (ATP 23) who is currently recovering from a heel operation.

Also entered from the next generation is the up-and-coming 19-year-old Dane Holger Rune. After winning his first ATP title in Munich and going all the way to the quarterfinals in Paris, Rune is currently world-ranked No. 29.

Another youngster, the 20-year-old Jannik Sinner is eager to claim his first ever title at a tournament in a German-speaking region: “The Hamburg European Open is a legendary clay-classic that I used to watch on television as a kid. I have also heard that Hamburg has quite a big Italian community and I hope they will come out to Rothenbaum to cheer for me.”

The only German directly qualified for the men’s event, in which all the eight seeds are all ranked in the Top 30, is the Cologne-born Oscar Otte. On the back of reaching the semifinals this year at the three German tournaments in Munich, Stuttgart and Halle, the 28-year-old has climbed up to No. 37 in the world rankings, a career best. “The Hamburg tournament is the most prestigious tournament in Germany and it is of immense importance for me. Hamburg is also one of the country’s most beautiful cities. I’m so looking forward to playing there and can hardly wait to get out on court,” said Otte with a view to the 116th Rothenbaum tournament.

As for the ladies, Sandra Reichel additionally singled out the tournament ambassador Andrea Petkovic (Germany/WTA 56), who played her way into the hearts of the Hamburg crowd when reaching the 2021 final, last year’s semifinalist Jule Niemeier (Germany/WTA 97) and the title-holder Elena-Gabriela Ruse (Romania/WTA 55).

The programme of side events is, after the corona years with many restrictions, once again multifarious. Theme days include the ARRIBA Family Day (Sunday, 17 July), the EDEKA Kids’ Day (Monday, 18 July), Ladies’ Day (Tuesday, 19 July), Gentlemen’s Day (Wednesday, 20 July), the Haier Family Day (Sunday, 24 July) as well as the Inclusion Days presented by the Alexander-Otto-Foundation under the “Tennis for everybody” motto (22/23 July). Wheelchair tennis activities and ones for blind and deaf persons also invite people to have a go themselves. Tennis players with a mental disability will also demonstrate their skills. There is also a wheelchair tennis exhibition match, commentators for blind persons will also be on air on Centre Court and sign language interpreters will translate interviews.

On 23 July, the day of the women’s final, the Federal Minister of the Interior with responsibility for sport, Nancy Faeser, is expected for a talk organised by the Active City on the topic of “Women in (elite) sport”.

Premium partnership with Cunard extended
Cunard will also remain, for the fourth year in succession, a sponsor of the Hamburg European Open in 2022.  Anja Tabarelli, Director Sales & Marketing Cunard Deutschland, stressed: “We’re delighted to once again this year be on board the Hamburg European Open as a premium partner and to co-shape such a time-honoured event in the beautiful Hanseatic city. An event and a fixed institution in Hamburg that, just like ourselves, has been inspired by the past and is made for the future. After the deprivations forced upon us by the pandemic, we can set sail again and the whole fleet is already sailing full speed ahead. Visitors can experience the Cunard feeling with all their senses during the Hamburg European Open from 16 to 24 July 2022,” said Anja Tabarelli, Director Sales & Marketing Cunard Deutschland on Wednesday.