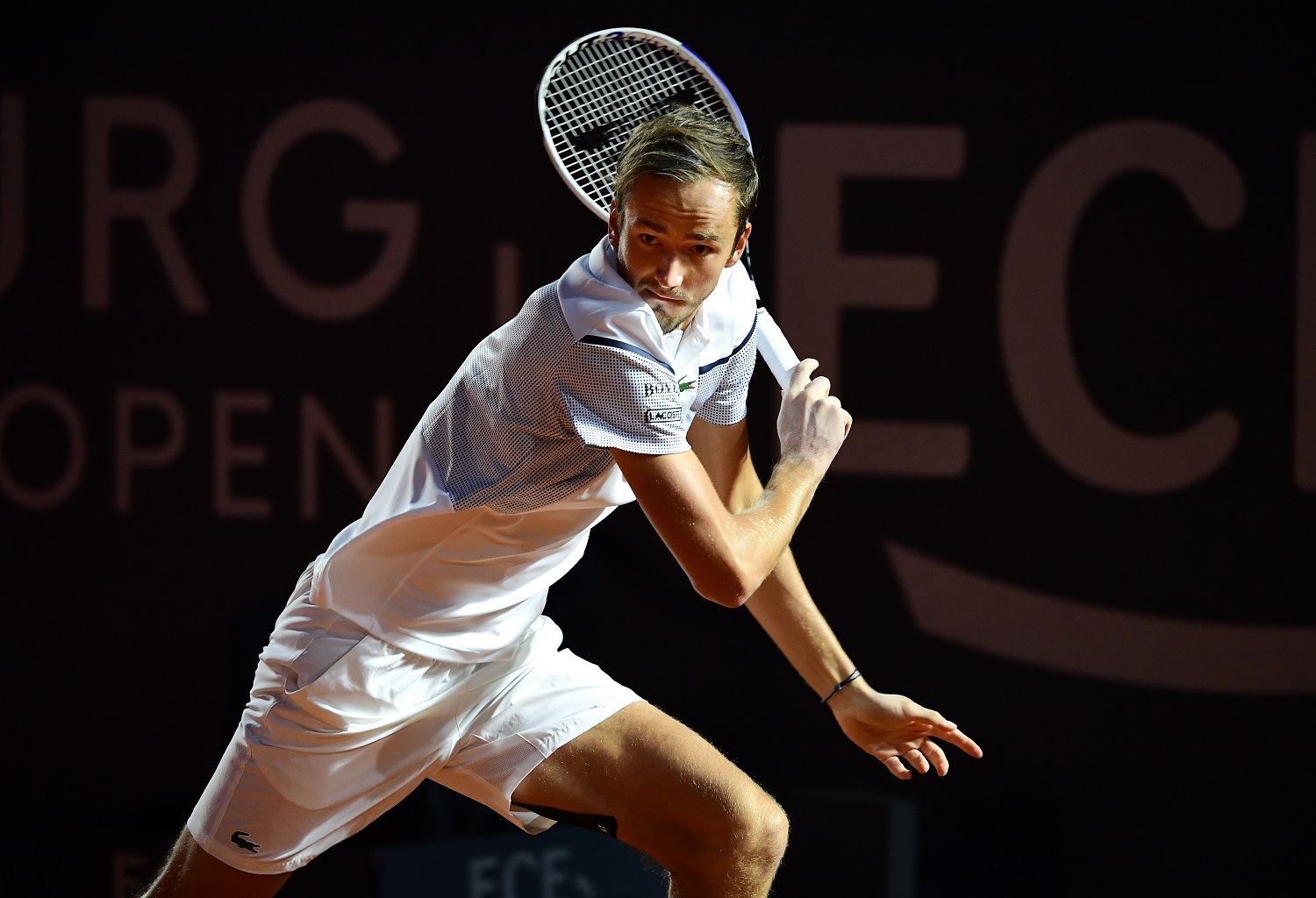 Ugo Humbert has caused the biggest upset at this year’s Hamburg European Open so far. The 22-year-old Frenchman knocked out the tournament’s top seed and World No. 5 Daniil Medvedev of Russia, winning 6-4, 6-3 under the lights of the Rothenbaum Tennis Stadium on Tuesday evening.

Humbert outpointed his opponent 58-48 to prevail after one hour and 22 minutes. “I am very happy with my level today,” the World No. 41 told Barbara Schett during his on-court interview. “I knew I can play well on clay, but this was one of my biggest wins,” Humbert said after celebrating his first match win over a top 10 player. Up next for the lefty will be Czech qualifier Jiri Vesely.

In other action, Medvedev’s compatriot Karen Khachanov rallied from 0-3 down in the final set to beat Jan-Lennard Struff of Germany 7-6(5), 4-6, 7-5 in two hours and 34 minutes. Khachanov will next take on Serbia’s Dusan Lajovic.

Canada’s #NextGenATP star Felix Auger-Aliassime began his Hamburg debut with a 6-2, 7-6(2) win over Lorenzo Sonego from Italy in one hour and 47 minutes.

“I had a good start into the match. Taking the first set is a big advantage,” the 20-year-old said. “I played well on the important points and saved all the break points in the second set. Things got tighter but, in the end, I served well keeping my pressure. It was good.”

Off-the court, Auger-Aliassime also seems to enjoy his stay at the Rothenbaum tournament.

“I heard they renovated the venue. I haven’t been here before, but everything looks amazing. Locker room, showers, all the facilities are great. The hotel is also great, so that we can relax and enjoy the time there. I had the chance to go out by car, taking some pictures from the harbour. That was cool. For sure I will be back either for playing or for vacation.”

The young gun will next take on lucky loser Alexander Bublik from Kazakhstan, who defeated Spaniard Albert Ramos-Vinolas 6-2, 7-6(5).

Earlier in the day, two college boys from Germany have booked their spot in the second round. Yannick Hanfmann, a former University of Southern California standout, knocked off No. 3 seeded Frenchman Gael Monfils, winning 6-4, 6-3. The wild card entry and runner-up at last week’s tournament in Kitzbühel saved the only break point he faced and capitalized on both of his own two break point chances to seal victory in one hour and 14 minutes.

Hanfmann will next take on Cristian Garin. The 24-year-old from Chile eased past Kei Nishikori of Japan, 6-0, 6-3. “For sure this was my best match since the resumption of the tour,” Garin was pleased with his performance.

The new No. 3 German in the ATP Rankings is Dominik Koepfer, who is a career-high World No. 66 this week. The 26-year-old from Furtwangen, who graduated from Tulane University in 2016 earning two All-American honours, advanced to the quarterfinals at the ATP Masters 1000 in Rome last week and continued his good run of form in Hamburg.

Koepfer fought past Yoshihito Nishioka of Japan, 7-6(0), 4-6, 6-1 in his first tour-level match on home soil, which lasted two hours and 29 minutes. Koepfer’s next opponent will be No. 4 seed Roberto Bautista-Agut, who beat two-time defending champion Nikoloz Basilashvili of Georgia 6-4, 6-3.