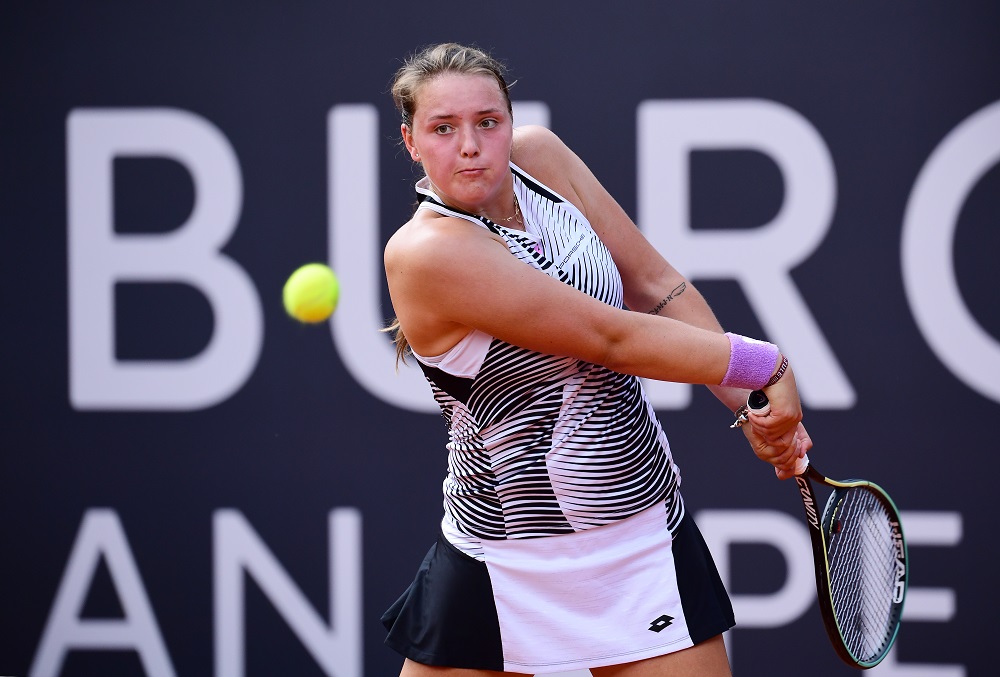 Four of the six German players in action on Wednesday booked their spot in the second round of the Hamburg European Open. In sunny conditions and in front of a crowd for the first time this week, Andrea Petkovic emerged victorious from the battle of the home favourites with Anna-Lena Friedsam, winning 6-4, 7-5.

About 600 spectators flocked to the Rothenbaum Tennis Stadium to witness Petkovic’s successful return to Hamburg after her debut match on the WTA Tour in 2002. The 33-year-old showed a solid performance and was in punishing mode throughout the encounter. Petkovic capitalized on four of her six break point chances to secure victory in one hour and 37 minutes.

“I am very happy with how I played,” Petkovic said in an on-court interview. “I have been solid throughout the past weeks, but it is always difficult to put it into matches. In the beginning, there was a little wind and I started to warm up with a few double faults, just to feel the stress and then I was okay after that.”

Following the grass-court swing, both in Germany and at Wimbledon, the Hamburg European Open tournament ambassador played her first match on clay after falling in the first round at Roland-Garros to Karolina Muchova..

“I brought the Wimbledon white. Later I figured out that it was not the smartest thing to do,” Petkovic said with a smile and added: “Obviously it is a different game. There are more rallies, and you have to slide. It is a different performance for the body and the muscles, but I grew up on clay and I think that I play better on this surface.”

Asked about memories of her last performance in Hamburg 19 years ago, the Darmstadt native had a funny story to tell: “I remember that my parents were very proud that I got a wild card. They came here with the car and during my warm-up they saw that their car was taken away. So, they rushed out, trying to get the car back and they missed my match. That is a great memory, but I replaced it with a good one today and I am very happy to be here in Hamburg.”

Petkovic will next challenge No. 2 seed Yulia Putintseva from Kazakhstan.

Earlier in the day, German rising tennis hope Jule Niemeier caused the upset of the day by knocking out No. 8 seed Caroline Garcia of France 6-4, 6-2. The 21-year-old wild card entrant sent down five aces and won 74 per cent of her first-service points to advance after one hour and 41 minutes.

Niemeier captured her third title on the ITF Pro Circuit in Prague in early May and reached her first semi-final on the WTA Tour in Strasbourg, France only three weeks later.

“It’s very special to play here at home in Germany against a strong opponent,” said Niemeier, who is currently sitting at a career high World No. 167 in the WTA Rankings. “I want to be one of the best players in the world. Hopefully I can be one of them pretty soon, but it is a long way to go. I will keep working hard and the results will come.”

Niemeier will try to continue her good run of form against fellow wild card entry and Hamburg native Tamara Korpatsch, who beat qualifier Mandy Minella of Luxembourg 7-5, 6-3 in one hour and 38 minutes.

„At the beginning, I was a bit nervous playing in front of spectators for the first time again,” Korpatsch said during her post-match on-court interview. “I didn’t feel so comfortable at the start of the match, but the second set went better. I enjoy playing in my hometown at my home club.”

Niemeier and Korpatsch will meet for the first time on the tour. “I expect a tough match, as she is a really good player,” Niemeier said of her upcoming task. “I have to play my best tennis and I am really looking forward to the match tomorrow.”

In other action, German qualifier Anna Zaja rallied past Viktoriya Tomova from Bulgaria 0-6, 6-3, 7-5 in one hour and 55 minutes and will next play Romanian qualifier Elena-Gabriela Ruse, who beat No. 6 seed Jil Teichmann from Switzerland 7-5, 7-6(1) in two hours and 14 minutes.

In the final match of the day, Italian veteran Sara Errani defeated No. 5 seed Finona Ferro of France 7-5, 6-3. The encounter lasted one hour and 32 minutes.