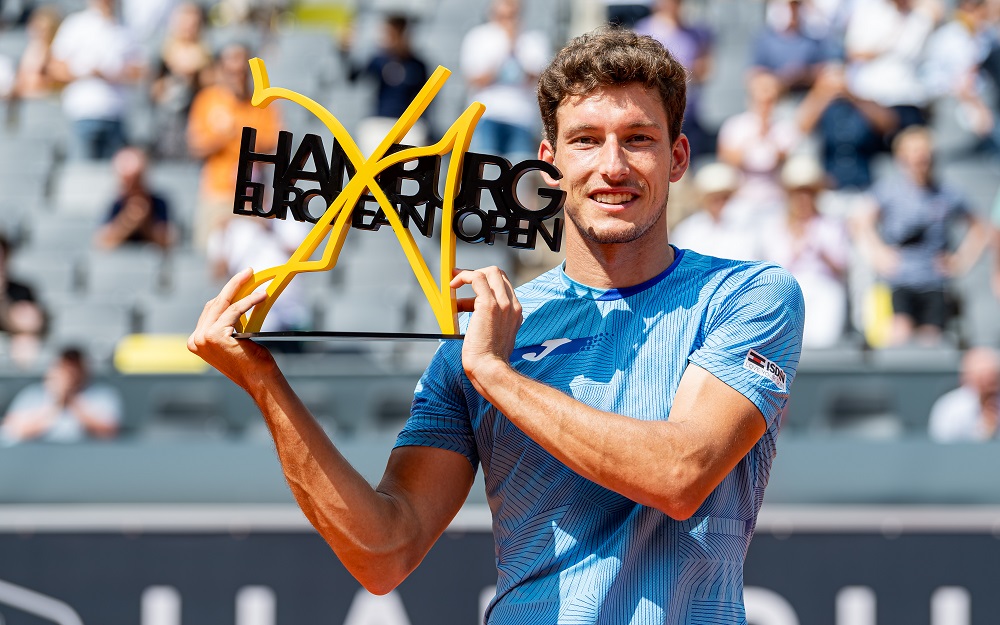 Spain’s Pablo Carreno Busta won his first ATP Tour 500 title by lifting the trophy at the Hamburg European Open. The No. 2 seed of the €1,168,220 clay-court event displayed a rock-solid performance against sixth favourite Filip Krajinovic of Serbia in Sunday’s singles final, winning 6-2, 6-4.

Carreno Busta set the tone early by breaking Krajinovic’s serve in the third game of the opening set. The World No. 12 fired 17 winners to close the set out after 37 minutes and continued to outplay his opponent from the baseline by putting a lot of variety in his shots in the second set. Carreno Busta also showed some decent net coverage. He gained an early break in the first game of the second set and never looked back as he secured the title victory in one hour and 22 minutes.

“You were too good today and you deserved to win,” World No. 44 Krajinovic told Carreno Busta during his runner-up speech on court. “It was my fourth final and I hope that the title win will come one day.”

The 30-year-old Spaniard, who didn’t drop a set all week, captured his sixth career title and pocketed €96,035 in prize money as well as 500 ATP Ranking points.

“Winning the first ATP 500 tournament is a step forward in my career,” Carreno Busta said. “I am happy with this win but also with my game during the final. I played one of my best matches of the year, which is not easy to do in a final. It is a special title for me. I lost my last final (at ATP 500 level) to Dominic Thiem in Rio. Finally, I have it and I like to continue this way.

“I arrived here on Saturday, and I didn’t play my first match before Thursday. So, I had enough time to prepare. I had a great time here and felt like playing at home.”

Next, Carreno Busta heads to Tokyo, where he will represent Spain at the Olympic Games.

Earlier in the day, Tim Puetz of Germany and New Zealand’s Michael Venus captured their first doubles title on the ATP Tour. The No. 2 seeds defeated the tournament’s top-seeded team of Kevin Krawietz from Germany and Romania’s Horia Tecau 6-3, 6-7(3), 10-8.

Puetz and Venus, however, had to do it the hard way. After being a set and 5-1 up in the second, Krawietz and Tecau fought back to push the match the distance. In the end, the second seeds won two points more to prevail after one hour and 41 minutes.

“It’s great for us being here and to have this tournament in Hamburg,” said Puetz, who became the first German doubles champion at the Rothenbaum Tennis Tournament since Karl Meiler lifted the trophy alongside South African Bob Hewitt in 1977.

“Thanks to the tournament, great event. I love coming back here. I really enjoyed playing on this court,” Venus said. The doubles champions split €33,180 in prize money and collected 500 ATP Doubles Ranking points.

Hamburg European Open to return in 2022

More than 25,000 spectators attended the matches throughout the fortnight in Hamburg. The tournaments received media coverage in 140 countries all over the world.

“We experienced 14 intense days during challenging times with the ongoing pandemic and the upcoming Olympic Games, but we even managed to add another tournament this year. It was important to welcome back women and men here in Hamburg, and it is our firm goal to organize a combined ATP/WTA event next year,” tournament director Sandra Reichel said.