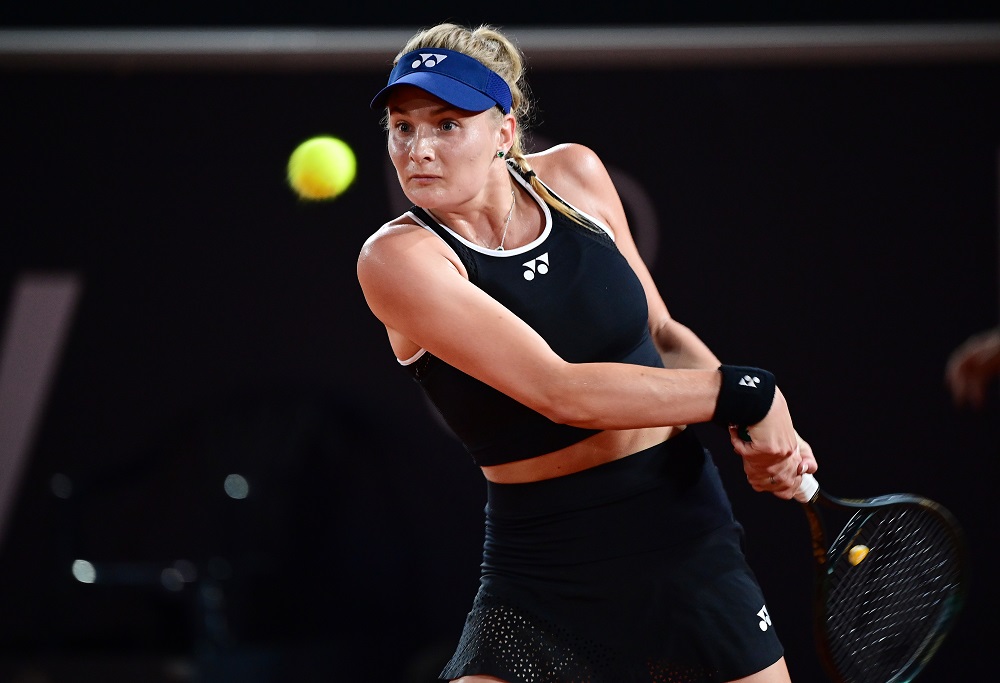 Top seed Dayana Yastremska began her title bid at the Hamburg European Open with a 7-6(5), 6-1 second-round win over Madgalena Frech of Poland on Friday evening.

In her first match on the WTA Tour since November last year, the World No. 38 from Ukraine outpointed her rival 73-60 after one hour and 47 minutes.

The 21-year-old will next take on Italian veteran Sara Errani, who edged past Ana Konjuh from Croatia 7-6(5), 6-3 in one hour and 32 minutes.

Earlier in the afternoon, home favorite Andrea Petkovic thrilled the 600 spectators at the Rothenbaum Tennis Stadium by knocking out No. 2 seed Yulia Putintseva of Kazakhstan 6-2, 1-6, 6-4.

In a highly entertaining match, Petkovic had a strong start. However, Putintseva started to find her rhythm with the beginning of the second set when the roof of the modernized Centre Court was closed due to bad weather. The Hamburg European Open tournament ambassador responded well and won five points more than her opponent in the final set. With the rain crushing hitting the roof overhead, Petkovic fired her racket up in delight when she converted her match point after two hours and 15 minutes.

“I am incredibly happy. It was an awesome match,” Petkovic said during her on-court interview. “I was trying to fight as hard as I could, and I am happy to win in the end. I played a good first set and she was trying to get into the tournament, as she didn’t play the first round. I was a bit passive in the second set but then I was trying to focus back on my strategy in the third set. But I believed from the first point that I can win. It is just a different thing to execute.”

Asked if it is a different game when the roof is closed, Petkovic responded: “It is a bit different. At the beginning, I was struggling with my serve. I was serving very well but everything was changing a bit. The lights are very bright, and I needed a few games to get used to it. We both played well but I was a bit luckier in the end.”

Petkovic will next take on Ysaline Bonaventure from Belgium, who knocked off seventh-seeded US-American Bernarda Pera 6-3, 3-6, 6-4 in one hour and 49 minutes.

Zidansek successful in return to the clay

Slovenia’s Tamara Zidansek battled past Kristyna Pliskova from the Czech Republic 6-3, 3-6, 6-3. The No. 3 seed withstood 10 aces from her opponent and broke Pliskova’s serve four times to secure victory in one hour and 52 minutes.

“It was my first match coming back from grass, and I needed some time to adapt but I am satisfied with the win. For sure, I still have to work on some things before the next match,” said Zidansek, who considers clay as her favourite surface. The biggest result of her career so far has come on the dirt when she reached the semi-finals at Roland-Garros in May.

“The atmosphere (in Paris) was amazing, paying on big courts like Philippe-Chatrier and Suzanne-Lenglen and getting the experience. I really enjoyed the two weeks there and hope that I can do it again.”

However, the 23-year-old Zidansek from Postojna also seems to feel comfortable in Hamburg. “This is my first time in Hamburg, and it is really nice. It is actually a similar environment to Slovenia. I love it here. I love the vibe. I have been to the lake, and it is very nice.”

Zidansek will next be challenged by German youngster Jule Niemeier, who fought past fellow wild card entry and Hamburg native Tamara Korpatsch 6-2, 6-7(5), 6-3. The 21-year-old from Dortmund won after two hours and 52 minutes.

“It was a tough match, as expected,” Niemeier said, after reaching her second quarterfinal at WTA-Tour level this season following her success in Strasbourg. “Tamara is a very good player, very consistent player. “Losing the second set after having match point made it difficult but I am happy to be through. I am proud of myself, as it was a tough situation mentally.”

In other action, No. 4 seed Danielle Collins of the United States also had to go the distance to overcome Slovakian lucky loser Kristina Kucova 1-6, 6-2, 6-3. Next, she will play Romanian qualifier Elena-Gabriela Ruse after the 23-year-old from Bucharest beat German qualifier Anna Zaja 6-2, 6-2 in 69 minutes.