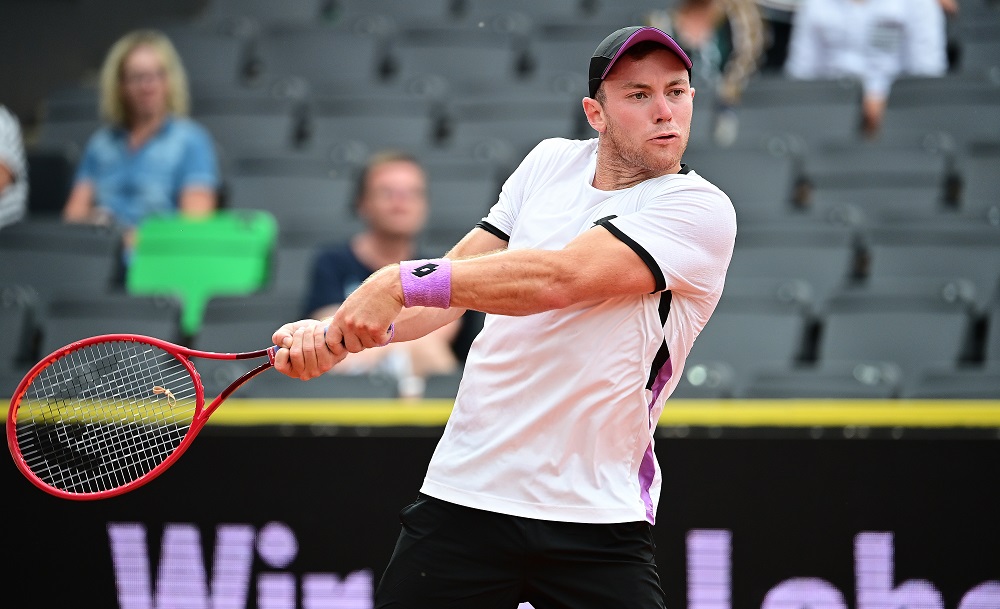 Tuesday’s action at the Hamburg European Open was headlined by four Germans but only one of them found his way into the second round of the ATP 500 clay-court tournament.

Dominik Koepfer earned himself a shot at the tournament’s top seed Stefanos Tsitsipas following a 7-6(2), 2-6, 7-6(4) win over fellow home favourite and qualifier Maximilian Marterer. In the pair’s first main draw meeting on the ATP Tour, the 27-year-old from Furtwangen won nine points more than his opponent to secure victory in two hours and 32 minutes.

“It was a tough and a close match,” Koepfer told Barbara Schett in an on-court interview. “I am very happy and pleased to win it in the end thanks to two good tie-breaks.”

Asked about his upcoming task against Tsitsipas, Koepfer responded:

“Stefanos is one of the best clay-court players this season and is ranked World No. 4. This will be a big match for me. Now I need to recover well to play a competitive match tomorrow.”

Earlier in the day, Laslo Djere knocked out No. 7 seed Jan-Lennard Struff, the highest-ranked German in the singles draw, 6-4, 7-5.

The 26-year-old Serbian sent down eight aces and won 76 per cent of his first-service points to secure his first victory over the World No. 47 in the pair’s third meeting after one hour and 50 minutes.

“It was very tough. I started to return well at 5-4 when I made the first break,” Djere said. “I had the momentum and broke him at the beginning of the second set, but he managed to come back. From then on, he played unbelievable, and I needed to stay focused. A few points made the difference, and I am happy to beat him for the first time.

“It is always nice to win the first round, especially at an ATP 500 event. Coming from grass, now I have three tournaments on clay, my favourite surface. I am trying not to expect too much, but I am aware that I can do well. Beating a player like Jan gives me a lot of confidence and motivation for my upcoming matches and tournaments.”

The World No. 57 will next oppose Brazilian qualifier Thiago Seyboth Wild.

In other action, Carlos Taberner won an all-Spanish affair with 39-year-old Feliciano Lopez, the oldest player in the singles draw, in his Hamburg debut. The 23-year-old qualifier from Valencia converted two of his six break-point chances to record his first ATP Tour main draw match win of the season.

“I have been watching Feliciano playing on the tour since I am five years old. He is having a great career and I am very happy to have won this match,” Taberner said in his post-match, on-court interview. “I like the conditions here. It is pretty sunny, which I prefer, as it is similar to Spain.”

Up next for Taberner will be a meeting with compatriot and No. 2 seed Pablo Carreno Busta. “Pablo is enjoying a great year and had some very good results at the US Open and at Roland Garros. I enjoy today and will get prepared for the upcoming match.”

Elsewhere, Slovakian qualifier and Belgrade Open runner-up Alex Molcan booked his spot in the second round following a hard-fought 6-4, 4-6, 7-6(3) win over Gianluca Mager from Italy and will next meet Serbia’s Dusan Lajovic.

Meanwhile, Stefanos Tsitsipas’ first appearance in Hamburg this year ended in defeat in the opening round of the doubles competition. Alongside his brother Petros, the pair lost 7-5, 7-6(5) to No. 2 seeds Tim Puetz from Germany and New Zealand’s Michael Venus.

The World No. 4 will be back in action on Wednesday when he will start bid for the singles title at the Rothenbaum Tennis Tournament.

Kohlschreiber in vintage mode, advances to the second round in Hamburg