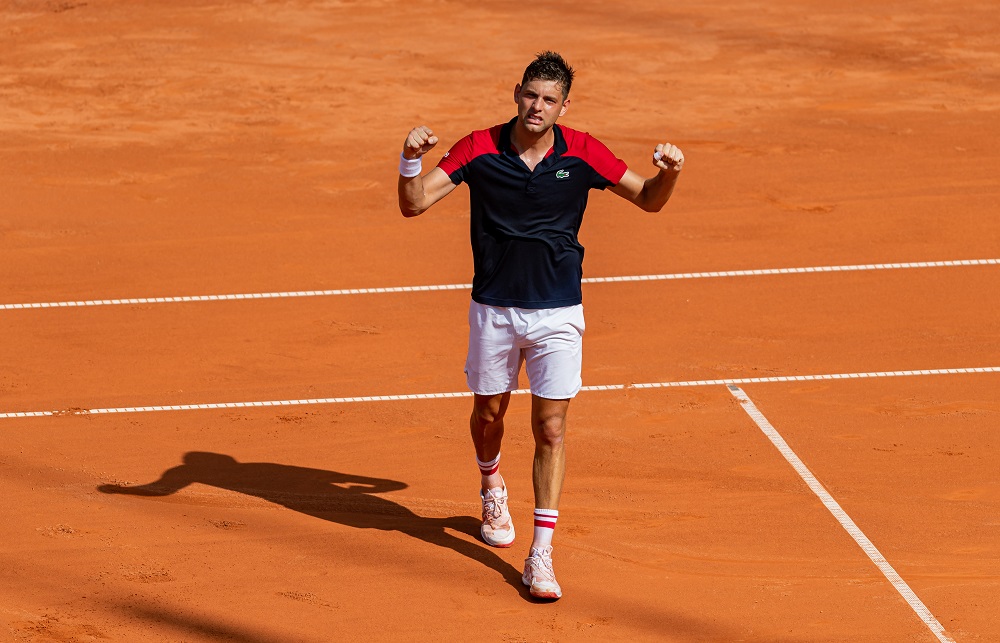 Serbia’s Filip Krajinovic enjoyed one of his best moments on the ATP Tour by edging out World No. 4 and top seed Stefanos Tsitsipas of Greece in Friday’s quarterfinals of the Hamburg European Open.

On another sunny day at the Rothenbaum Tennis Complex, after Tsitsipas started fast by winning the opening 11 points, Krajinovic found his rhythm and played with more confidence. The 29-year-old Serbian put a lot of variety in his shot making, using the backhand drop shot with success. The sixth seed withstood 11 aces from Tsitsipas and broke the Greek’s serve five times to secure a 3-6, 6-1, 6-3 victory in almost two hours of play.

“He started really well, being aggressive and I couldn’t find my game,” Krajinovic said. “He overpowered me but at the end of the first set I started to feel better. I was going for my shots down the line. It paid off in the end. I am happy to beat such a great player and I am enjoying it right now.”

The World No. 44 equalled his best-ever win after beating Dominic Thiem at the ATP Masters 1000 in Cincinnati last year. Krajinovic posted his third Top 10 win and will compete in his first semi-finals in Hamburg.

“For sure this was one of my best wins and means a lot to me. I like to play here. The crowd is really nice. I knew that he is the favourite – as he is a Top Five player and deserves all attention – but I always play well here and hope to keep it going.”

Next, Krajinovic will take on compatriot Laslo Djere, who knocked off No. 3 seed and two-time Rothenbaum champion Nikoloz Basilashvili. The 29th-ranked Georgian was playing his first match this week in Hamburg following a walkover win against lucky loser Sebastian Baez of Argentina in the second round. The 26-year-old Djere was in total control of the encounter. He didn’t face a break point and prevailed 6-2, 6-2 in 63 minutes.

“I was a little bit surprised, as I expected a tougher match, but it wasn’t his day,” said the World No. 57 Djere, who hopes to be seeded at Grand Slam tournaments in the near future. “I’m happy to win the match without any complications, without losing my serve and spending unnecessary time on the court. So, I will be able to be ready for the next round.”

Later in the afternoon, Pablo Carreno Busta booked his place in the semi-finals following a 7-6(4), 6-3 win over No. 5 seed Dusan Lajovic of Serbia. The second favourite from Spain sent down five aces and won 74 per cent of his first-service points to advance after one hour and 35 minutes.

“It was a good win today,” Carreno Busta said. “The key was to keep fighting when I was 4-0 down in the first set. Dusan had a very good start and I needed to change something, as it wasn’t enough. I tried to play with more spin and a bit slower. It worked out. The first set was really tough but, in the end, I could do the break in the seventh game (of the second set) and served it out.”

The World No. 13 Carreno Busta will return to the stage of the final four in Hamburg for the second time after 2019. He will face No. 48 Federico Delbonis on Saturday. The 30-year-old Argentine rallied past eighth-seeded Frenchman Benoit Paire 4-6, 7-6(9), 6-4. Delbonis saved four match points in the tie-break of the second set to complete his comeback victory after two hours and 19 minutes.

“I was consistent throughout the match,” said Delbonis. “I had some problems at the beginning of the match. He played a couple of drop shots, and I couldn’t play my game from the back of the court. I cooled down in the second set, took my opportunities and my confidence went up by winning the tie-break.”

The South American lefty will return to his second Hamburg semi-final after 2013 when he beat Swiss superstar Roger Federer en route to the championship match.